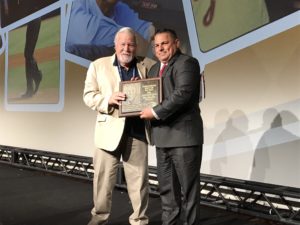 Sal Agostinelli was born and raised in the Bronx, New York on September 4, 1961. A baseball fan and player from his earliest days, Agostinelli played both high school ball and in college at Slippery Rock University.

A solid hitting catcher, Agostinelli was selected by the Saint Louis Cardinals in the 22nd round of the 1983 MLB Amateur Draft. Over the next four years he would rise through the Cardinals organization, reaching Triple-A Louisville by 1987. He then received an invite to spring training for 1988 with the big club.

After a struggling season in 1988 during which he hit just .206 at two levels, Agostinelli was released by Saint Louis. He wouldn’t stay unemployed for long. The Phillies signed him and sent him to AA-Reading where he spent the entirety of the 1989 season.

Over the next three years, Agostinelli drifted up and down the Phillies organizational ladder, taking various turns at Reading, High-A Clearwater, and Triple-A Scranton/Wilkes-Barre. Though he received an invitation to spring training with the Phillies in 1991, he was never able to impress enough to receive a call to the big-leagues.

The Phillies didn’t think that Agostinelli would be able to help them as a player. But he had impressed with his knowledge of the game and his ability to get along with people. The Phillies asked him to take a coaching job and he accepted, spending time with both the short-season affiliate at Martinsville, Virginia and at Reading.

The next year, Agostinelli became a scout. From 1993 through the 1996 season he worked in the Phillies organization as an area scout, evaluating high school and college players in preparation for the June amateur draft.

Impressed with his work, the Phillies offered Agostinelli the position as their International Scouting Director in 1997. In this role he would oversee a staff covering places outside of the United States and its territories such as the Dominican Republic, Venezuela, Japan, and Korea.